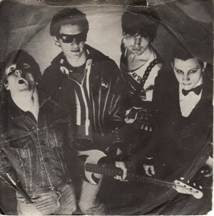 "Is She Really going out with him?" The Most memorable start to any song ever - anyone got anything better?

And then it just get better.

Touted as the first ever punk record in the UK (see KBD records in the comment box - thanks for correcting me) to be put on Vinyl It was said that they rushed it out to be the first, but if this is an example of a rushed out song, then lets have more. I know most people will have this, but I am not so sure that they will have the excellent cover of the Beatles "Help" on the b-side. So here it is, just for you. 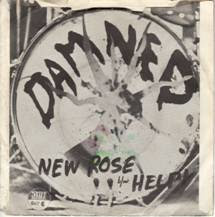 You can hear by the scratches that I played this endlessly, and have never tired of it.

More etching trivia on this one. The Damned were always known as a fun band, especially with members such as Rat Scabies and Captain Sensible. I assume these etchings are from the Damned. On side a it has "Is This A Record?" and on side b "Damned Beatles" a reference to their cover of help.

if you like this and you don't already have the Damned debut album then go and buy it now, you will not be disappointed:

Thanks for your comment. Strange I purchased I'm Stranded, I didn't remember it being that old. I have amended the post to say first in UK.

KBD is of cource correct about the releases of those three singles, all I can say is what an amazing opening barage with which to set out punk's mission statement. A true template for 1000's of bands to follow.

Your not wrong there anon, three classic records to kick of the punk vinyl era