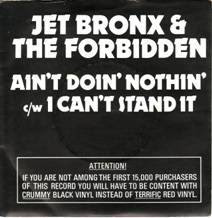 The one and only single from Jet Bronx and the Forbidden, and its a shame because "Ain't Doin' Nothin' is a really catchy song.

One point of note is that Jet Bronx is actually Lloyd Grossman the TV presenter and Chef. He is not only the lead vocalist, but he also wrote the songs and produced them. Not bad. 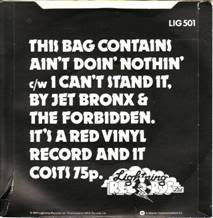 Check the price as well -75p - those were the days.

I used to own a red vinyl version of this but I swapped it for something which I cant remember. Pretty sure Jet Bronx did have another single after this one but not sure if it was with "The Forbidden" or just as Jet Bronx. Another classic upload mate

Can we have the other Jet Bronx single, Rock N Roll Romance? Nobody seems to have it online. Rumour has it Mr Grossman may be forming a new Forbidden and playing some reunion gigs!

Thanks anon, for those of you too lazy to follow the link, the Pork Dukes are on the bill for a gig in Austria with special guest Jet Bronx. Interesting line-up

indeed he has formed a NEW FORBIDDEN ! Jet Bronx and the New Forbidden play The Rhythm Factory in Whitechapel, London E1 1EW on Thurs 26 June. check www.rhythmfactory.co.uk for more info !

Hi Spoon thanks for that I will check it out.

http://www.myspace.com/jetbronx
This is our site - work in progress. Come to gig on 26th June at Rhythm Factory. New band doing Loyd's brilliant 1970s stuff plus some of my songs. I am the vocalist.

Hi Anon, That might be because its by Wayne County and the Electric Chairs and not Jet Bronx