Punk-A-Rama - Venus and the Razorblades 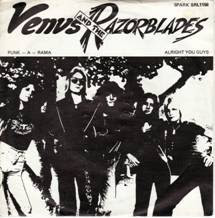 This is a real curiosity and one that really grows on you. This is "Venus and The Razorblades" debut single. Kim Fowley pulled this band together from a group of young LA punks.

Using their own words it is "an aural travelogue through the vital elements in the infancy of punk rock". You will have to listen, and then you will see what they mean.

You know I have just realized that my single does not match the cover, the b-side on my single is "Press Conference" and mine is on the "BOMP" label and no 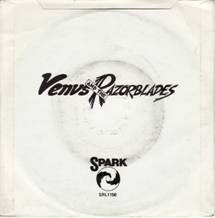 t "Spark". How did that happen?

This b-side is interesting as it is a radio interview with Kim Fowley and "Venus and the Razorblades" and they are discussing that they have split up after this single. They also tell the radio that they have been writing a song for "the Runaways" called "I want To be where The Boys Are" which ended up being "Venus and The Razorblades" second single (I will post this later) as well as "the Runaways" recording it.

The did release an album "Songs From The Sunshine Jungle" which I have been searching for years.

Labels: 1977, Punk, Venus and the Razorblades

Nathan Nothin' here.
Just found out about your site from
a friend at
Underneathica. Great stuff here & I'll be back often. I have a blog
Nothin' Sez Somethin' that I'm using to rip my record collectin & post on the Internet.
I have much old punk as well as most other kinds of craziness, so your site is more specialized...I just don't have a very good attention span.
I have Venus & the Razor Blades "Songs From the Sunshine Jungle" that I can rip & upload somewhere that you can get it if that's what you had in mind???
Let me know,
NØ

Hi Nathan, thanks for your comments. I am on the road for the next couple of days, so I will check your blog out later in the week.

Yes I would like a copy of 'songs from the sunshine jungle' so it would be much appreciated if you post it.