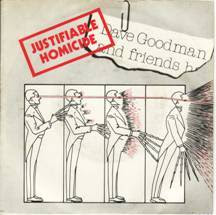 One of two songs (the other by the Angelic Upstarts - I will post later) released in 1978 protesting about the verdict given by the courts, over the death off Liddle Towers who died of internal bleeding shortly after being released from police custody. The re-trial which was forced, and the verdict was changed to "Missadventure". Yeah, right sounds like good old British Justice won through in the end.

On top of great lyrics this also an excellent single. It still gets me singing along and the lyrics still make me feel angry with the injustice. The b-side is an average instrumental but I include it for completeness. 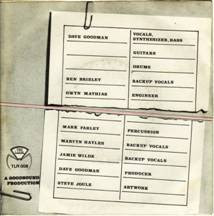 Other points to note, Dave Goodman recorded this with his friends, of whom some are listed on the back cover. You will notice no names for Guitars and Drums, I don't know why they were left off but they were Steve Jones and Paul Cook of the "Sex Pistols".

This copy is on groovy red vinyl. And again you can see the attempts at humour on the label: "Published by the Publishers" and "Sounds Good Man Productions" 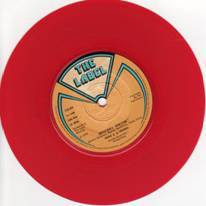 Dave Goodman continued in the music industry producing many bands (including the cash Pussies, one of my earlier postings). To find more about Dave Goodman then click on his name to visit his site.

Haven't heard this for over 25 years and its a pleasure to hear it now. Great upload mate!

Thanks again Longy. I enjoyed playing it again as well.

There is a third punk song about the case of Liddle Towers - 'Blue Murder' by Tom Robinson Band. The record TRB Two, on which the song is, was dedicated to Mary Towers (Liddle's mother).

Hi Flagburner, thanks for the extra info, i didn't know bout the TRB track.

I love the intensity and the beat of this tune. A real classic...a gem! But when it comes to the lyrics, sorry, but I can't understand a lot of it.
What's the chance of getting them posted? I've searched everywhere but come up empty handed.

Hi anon yes its a great track, On the lyrics I'm not sure I know all of them and I'm afraid I haven't got the time to try and work them out.