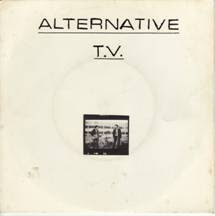 I’ve had a few comments asking, when are we going to get some Alternative T.V. or ATV as they were later known, so here is the first.

Although I never managed to get hold of the original 1977 fanzine “Sniffin Glue” with the free flexi disc “Love Lies Limp”, which was essentially Alternative T.V.’s debut single. Mark Perry (lead singer) agreed to reissue it due to demand and here it is, also backed up with another ATV classic “Life”.
For me “Love Lies Limp” is their best song, the reggae/punk style and the excellent lyrics are a perfect marriage. “Life” is a more traditional punk style song, but both are excellent. 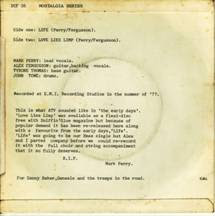 “Life” was released on the “Deptford Fun City Records” which also hosted bands such as Squeeze’s debut single. Even though the tracks are early ATV recordings (e.g. 1977) thye were not released until their fourth single (including the flexi disc)
Band: Alternative T.V.
Label: Records
Year: 1978
Tracks:
1. Life
2. Love Lies Limp
Ripped from glorious scratched vinyl:

If you like then, go and buy this now. It is an excellent album, I will post a few more of ATV’s singles, but you need to get this. A mixture of their singles and a live session:
Posted by garychching at 11:14

One of my all time favourite punk songs. Cheers mate another beauty you've posted there.

Great. My fav is "How much longer" but this one is really really good.
Do you have the live LP, I think it was with Here & Now ? Never seen in it for a very long long time.

Hi Longy and Arstider, thanks for the comments again.

I don't have there live LP, although I would like it, perhaps we should do a call for it. Although the 'Jet Bronx one has not turned up anything yet.

The LP you want is on the Killyourpetpuppy site lads. Scroll halfway down this page and you'll come across it

Me too. thanks whoever you were anonymous

Another splendid post, Gary - thanks. I can remember the absolutely HORRIFIED look on the face of the bloke who ran the church youth club when I played my sister's copy of this and he paused for a moment to have a bit of a listen to the lyrics. Cool.

Hi John, the worse song I played was when my mum heard Ian Dury's album 'New Boots and Panties. She actually liked a couple of tracks and then 'Plaistow Patricia' started: "Arseholes, Bastards, F*cking C*nts and pricks". It was too late by the time I got it of the turntable the damage was done.