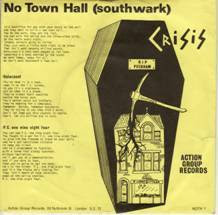 Crisis were one of my favourite punk bands for a number of reasons:

1. Their songs were brilliant
2. They were a local band (surrey)
3. I knew half of them
4. We used to get on the guest list

Its funny listening to these songs now, to think we were teenagers protesting the building of a town hall, today I don't think many people could care less. 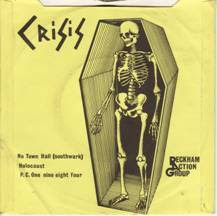 My favourite tracks on this single is P.C. One Nine Eight Four (note the play on 1984) , because it is a classic punk song and secondly the lyrics were very true for the late seventies. I can think of a number of times the police waded in for no reason (well we may have been humming the theme of z-cars - but still a little excessive reaction).

See what you think, I will put some other Crisis stuff up later (plus a few more stories). I also have attached a high resolution copy of the front cover so you can sing along to the lyrics. Enjoy.

They did release an album with all of their singles on, which is sadly no longer available. If people want it then leave a comment and I will post it later on.

So ripped from glorious scratched vinyl onto substandard mp3
Posted by garychching at 12:02

Hey Germt tried both links but couldn't get them to work

Great Blog!
I suppose you mean "Crisis - We are all Jews and Germans"?
I would love that!!
Please upload it

Hi Anon, I will post it some time soon

That would be awesome.Thanks
Some of the recordings i have are so beat up...It would be a blessing for my ears :)

Doug Pearce has rereleased loads of Crisis stuff through his site at deathinjune dot net. Check it out, although I dunno what you'll make of his current NeoFolk material?

Have you got Uncarved Block by Flux? They were Flux Of Pink Indians once.....

Hi Eden (again) thanks for the heads up on the crisis stuff. I will definitely buying the bootleg of their final gig at Guildford (especially as I was there)

Anyone else who like crisis, its worth checking out.