Slaughter and the Dogs - Cranked Up Really High 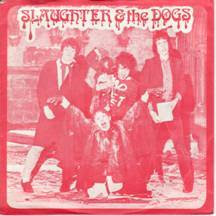 This was 'Slaughter and the Dogs' debut single. Hailing from Manchester, but frequent visitors to London and in particular "the Roxy". If you get the first 'Roxy London Wc2' album which appears to be deleted now (so I will most probably post this sometime) you will find two tracks from 'Slaughter and the Dogs"

This is one of the all time punk classics, noisy, fast and furious. There other single releases were mixed in my opinion, some excellent, some average, I will post a few more of the good ones. 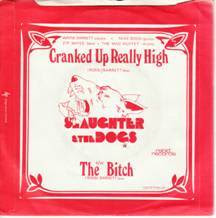 available, however from some of the comments in the past posts, some visitors have said this blog has helped give awareness of some of the classic bands were around in the late seventies. So this is for those who have not had a chance to hear 'Slaughter and the Dogs' before and will hopefully lead them to buying some of their classic albums.

If you like this then go and buy their classic debut album now:

Neither of these postings are on the above album, so if you want digital quality then go and buy this excellent collection of their singles:

Yet another classic. Awesome tune,their best one in my opinion. Thanks again mate.

This is such a great single!
I did run a crappy fanzine back in the old days. Mainly concentrating on local swedish bands. The only foreign band I did ever write to was Slaughter and the Dogs. I recieved a nice answer with a good looking (large) badge. I still remember one question, "What do you think of the Queen?". - The band or the bitch.

By the way,
I think this single was released again later by the company they signed for the lp.
I remember buying it in England, the Rabid one.

Ha ha, thanks for that Robert, I am still laughing aloud, everyone is looking at me at work.