The Nips - Only The End Of The Beginning

The Nipple Erectors shortened their name to the Nips. I think this was released first as "The 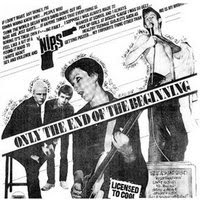 Tits Of Soho/Only The End of the Beginning" (which included all the singles and a live gig recording). It was then re-released in 1980 as just a 14 track live LP, just called "Only The End Of the Beginning", and it is latter that I am posting here.

It's a pretty good recording and one that I have always enjoyed, see what you think.

Ripped from glorious good condition vinyl
Posted by garychching at 11:49

Oj the fond memories of seeing this band many times, when I first arrived in London. Still recall sticking the albums in the cellophane covers at the Rocks Off Stall, where Shane worked.

I do hear that the abnd havn't got a penny from the CD re-issue of "pills, Bops...." so dont feel guilty about posting this.

I have some other Nips (and early Pogues" which I have managed to get on CD, if I could only figure out how to get them on the internet.

Hi TT thanks for taking the time to comment, much appreciated,

If you want to post the mp3's to me via email, one at a time I can post them (you get named and the credit) or you could create a mediafire account (its free) and upload them.

I would love to hear what you have