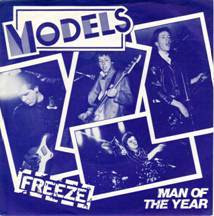 Another punk classic from the 1977 era. Like so many punk bands, this was the Models first and only single, and its brilliant.

It's classed as a double a-side but for me the best track is "Freeze".

One other point of note, is the guitarist Marco is in fact Marco Pirroni who joined the "Models" in between his stint at the Banshees and joining Adam and the Ants. 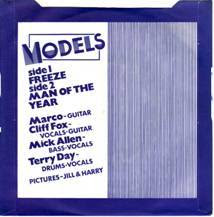 Why does everyone mention Marco Pirroni but TOTALLY overlook the fact that the bass player/backing vocalist Mick Allen is, in fact, Michael Allen from Rema Rema, Mass, and The Wolfgang Press, the latter of which happens to be possibly the finest group in the history of music?? Alright, I jest. But The Wolfgang Press is brilliant. Check out the album "Bird Wood Cage". And Marco, he's fine.

Hi Kelldicott, thanks for the comment, which is the main reason I run this blog. I love finding out new buts of trivia and info. So I will check out Wolfgang Press.

This is a great record. I saw The Models play several times at the Vortex Club, and also supporting Siouxsie and the Banshees at the Rainbow, I think. They were a really good band, I always thought they deserved more success.

Hi Martin, yep its a good one. I also saw the models and I think at the Vortex, I struggle to remmember sometimes. They did deserve more success, and I guess a couple of them did get a little more fame (see fist comment).

Thanks for taking the time to leave a comment.