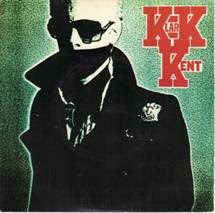 Klark Kent's was a pseudonym for Stewart Copeland (of the Police) and this was his debut single in this guise.

Clearly Copeland is a Superman fan, with the name Klark Kent (Clark Kent from the comic), The label is Kryptone (Kryptonite is the fictional material that weakens Superman), this vinyl copy is green (so is Kryptonite). Hey, I know all this and I'm not a real Superman fan.

"Don't care" is a decent New Wave song, I'm personally not so impressed with the two tracks on the b-side (not bad - but you decide) 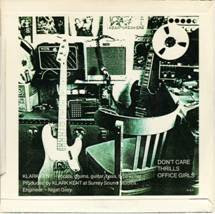 He did release a few more singles and a 10" (green again) album, which I have if anyone is interested. They also released an album called "Kollected Works" which is going for £60 on Amazon market place (ouch!). If anyone has this, then post it please. I totally did not know that KlarKKenet was Stewart Copeland. I've always liked his soundtrack work a lot. Any chance you have "Kinetic Ritual"? The song is hot - I still have my copy on 10".

Hi Sean and anon (only just seen the anonymous comment). I do have some more KK stuff. I do have Kinetic Ritual somewhere.

I've got the Green EP for sale. It's the version with the Die Cut black cover, green insert. and of course green vinyl.

Hi Nick I'm afraid due to severe money constraints I am no longer collecting, give it a try on ebay. Good luck