Magazine - Shot By Both Sides 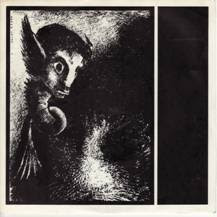 If Howard Devoto had not left the Buzzcocks is this what they would have sounded like? In my opinion we were lucky that we ended up with both the Buzzcocks and Magazine. This was Magazines first release and Devoto does not let us down. Both sides are brilliant, and still a little more punk than his later records.

Its not surprising how good Magazine were, look at the line up on the back of the cover. Barry Adamson on bass, who went on to produce some excellent solo material. John McGeoch who also played in PIL, The Banshees, and Visage. Pete Shelly contributed to the music for "Shot By Both Sides" 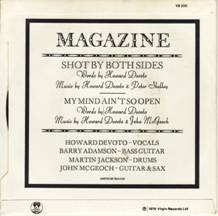 If you have not heard both of these tracks, then you are in for a treat.


If you like this, then go out and buy Magazines excellent first album. It is still one of my all time favorites:

all the music you have is great, ive heard alot oabut and of them , but never really know all these bands. nice

Hey Princess thanks for your comment. Its really motivating to hear that people are enjoying the music