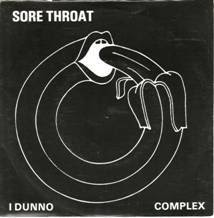 Sore Throat were a decent live band, who released three good singles, and one album, and then appeared to disappear. This is their debut single, of which "Complex" the b-side is the best track, I love the lyrics (eight years later, I'm a pervert maybe now they'll see), my only complaint would be that it is a little too long (5 mins+). Each of their singles are very different, I will post some more later.

This is definitely new wave, so if you looking for some Punk don't bother with this one. As usual with New Wave bands they tended to be more musically accomplished and Sore Throat 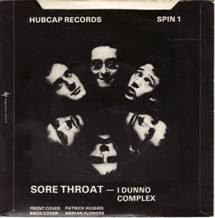 Also in-line with this period you will see bands trying to be witty or humorous on the covers or labels. This one was released on "Hub Cap Records" as "Spin 1". 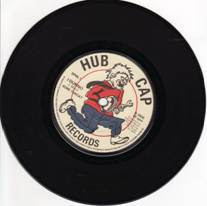 Now this is really excellent! Thanks for that. An amazing rarity. Great sax work and clever lyrics.

Hello. This post is likeable, and your blog is very interesting, congratulations :-). I will add in my blogroll =). If possible gives a last there on my site, it is about the CresceNet, I hope you enjoy. The address is http://www.provedorcrescenet.com . A hug.

My name is Cameron Cook, and I was the designer of the Hub Cap record label back in 1978. I was only 17 years of age at the time when I was asked by a guy called Rick during an evening spent in the Osbourne Arms public house in Lane End Bucks to design and then draw freehand the thug running away with the hub cap. Therefore, if have a copy of this 7" record in your collection, then I suggest that look after it because there was only a limited number produced and it will become very collectible one day :-)