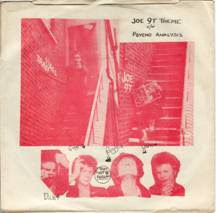 Considering there were only 1,000 copies of this, I am sure many of you will not have heard this single.

It was released as a white label split side (a different band on each side) single. It was a real DIY punk approach, even the cover has the names of "They must be Russians", penned by hand.

For me the best song is the "Joe 9T Theme" by "Joe 9T and the Thunderbird's" a real punk classic. If you want to know more about these bands then 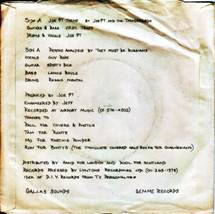 For those of you who don't know who Joe 90 (the real name) was, he was the main character in a "Gerry Anderson" puppet show (just like Thunderbird's - also Gerry Anderson). Joe 90 was never that cool (not as cool as Captain Scarlet and Thunderbird's), he was a young bespectacled kid, who by using a machine could transfer other peoples knowledge into his head, so he could save the day.

As a treat and for those of you too young to remember I have also included the original Joe 90 Theme. 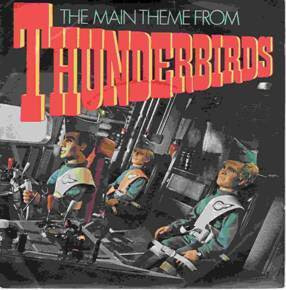 Labels: 1979, Joe 9T and the Thunderbirds, Punk, They Must Be Russians

Cheers mate, never heard this one before. Don't know if you realise but you've got the Brian James covers in with this one and not the J9T. Yet another great upload. Keep up the great work.

Hi Longy I have replaced the file with right pictures.

Thanks for spotting it

This is by far the best blog I ever visited. All my old vinyls available. Thank you.
Robert - Stockholm

One I haven't got! Cheers again Gary. Being into such things.....do you remember "Marine Boy"? Andy C

Jeronyme and Robert thanks for you comments, much appreciated.

Andy I do remember Marine Boy (it was a cartoon I think) I used to watch it.

check out "On the Crest" for you.

thanks again, one of my favorites and it good to let other people hear it.