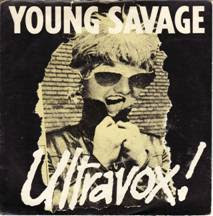 The original Ultravox!. The ! at the end is the only difference in the bands name between the classic John Foxx first incarnation and the dreadful Midge Ure second incarnation.

I bought this single because of the cover (I liked the look of it) got home put it on, and was blown away by the brilliant "Young Savage", In my opinion a classic punk song and therefore punk band. I then scoured the NME and found that they were playing at the Marquee in Wardour Street and went to see them, I was shocked to find out that they were not Punk, but more..... couldn't classify them at the time, but it was one of the best gigs I had ever been to. I then went out and purchased their first album, which a word of warning, although brilliant it is not punk at all. From then on they were one of my favorite bands and I 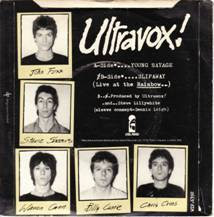 stuck with them for all three albums listed at the bottom, and even John Foxx's excellent solo period for the first two albums.

Although different from Young Savage I recommend that you buy all three of these CD's. If you prefer the punk style, start with their second Ha! ha! ha!

the best group 80'
Thanks

One of my all time favorites, did you ever see them?

Dreadful Midge Ure incarnation?! I love both versions of the band. Also I think you'll find they dropped the exclam mark before Systems Of Romance. Thanks for the music. Great site.

Hi Chris,thanks for the comment and compliment, its much appreciated. Midge Ure never did it for me, but hey each to their own. Yep your right the ! was only for the first and second album and then disappeared. well spotted.

Hi Gary, yes Midge's moustache alone was crime enough, without the overblown Vienna track ! I think I see both in a more humorous light somehow, being myself fond of the lesser known stuff.
His solo stuff was dire that's for sure but I liked Rich Kids. I totally agree with you on Ha Ha Ha - great punk sound, esp Distant Smile, Fear In The Western World. The live version of Slip Away on Young Savage 7" is great too.
I see you like the Foxx solo stuff too, I especially like The Garden, he has just released a live performance of the entire Metamatic album, called "A New Kind Of Man". Amazed you actually saw them live. Lots of great music you have posted on here - much to investigate. Keep it up, cheers, Chris.

Your dead right about that moustache, it wasn't the coolest look at the time.
Looks like we have similar tastes in the John Foxx camp, The Garden was my fave as well. I saw he did the tour doing Metamatic, but unfortunately too late to actually go and see it. I'll have ti check out the album instead, thanks for the heads up.

All the best, Gary