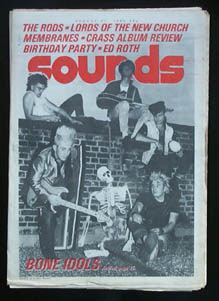 Actifed were named after a cough medicine, which the company subsequently took legal action to stop the band using the name.

Based in surrey the first band lineup was Dave Rogers, John Bristow, Rob Ryan and Al (From Jacobs Well , Guildford) with the first offical singer being Weasel (see more below on singers).

This posting I guess is very rare as it is a tape recording of one of their very early rehearsals, and much of this will never have been heard by many people. The singers include Phraser (from Crisis) singing all of the songs that are in tune, Weasel singing McKinneys Manacles (both versions) who for a while was Actifed's lead singer, and the off-tune songs were embarrassingly sung by me. The recordings are not great as they from a hand held tape recorder.

The first Actifed gig was at a wedding reception around 1980 (I've got the picture somewhere). weasel and myself sang, reading the lyrics from printed sheets (I still have those printed sheets). I was dropped after this gig (and rightly so, as I couldn't sing)

A year(ish) later they managed to get themselves on the front cover of sounds, not bad considering they hadn't even released anything.

Some of the tracks names are wrong on the mp3, the listing below is accurate.

So ripped from a glorious hand held tape recorder:
Posted by garychching at 11:52