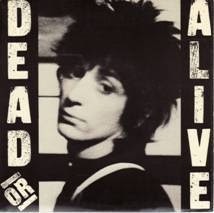 There is so much to say about 'Johnny Thunders' and so many have said so much already, it's difficult to know where to start.

I loved 'The New York Dolls' his first band, I loved the more punky 'Heartbreakers' and I have never stopped playing his debut solo album 'So Alone'

'Dead or Alive' was his debut solo single, and it is an all time classic. The b-side 'Downtown is also good, but in this case it is the a-side that stands out. When his album 'So Alone' was originally released, 'Dead Or Alive' was not on it, but for you it 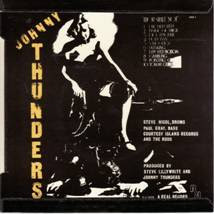 is now included alongside the classic b-side 'Hurtin' from his second single (I will post this sometime).

The label tells you to 'Play real loud' and so you should, its blasting out my speakers right now, and I have never got bored with this one.

Vic Goddard was also clearly a 'Johnny Thunders' fan and released a self-titled song which I have included as a secret freebie (as I was too busy to get a post out yesterday). from the start you will hear the classic 'New York Dolls' whistle and riff. Enjoy.


If you like this go and buy this album now it is an all time classic.

If any of you downloaded the classic 'Shangri La's' album from the excellent blog Thee Head Vein then you can compare their original 'Great Big Kiss' with the brilliant 'Johnny Thunders' cover - JT wins in my opinion.
Posted by garychching at 11:08

Here we go!!!
My favourite musician of all time, and still is.
Don't miss the best music-forum on the net, Chatterbox.
Robert - Stockholm

I'm with you Robert, Johnny was one of the coolest ever

I love the vinyl rip! Thanks for posting this.