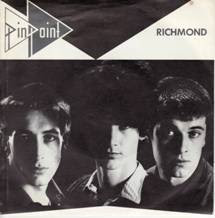 Arturo (formerly of the Lurkers) formed a new band called 'Pinpoint' and this was their debut single.

In my opinion this single was excellent and 'Pinpoint' were also a pretty good live band. The b-side 'Love Substitute' is OK, but the a-side 'Richmond' is outstanding. 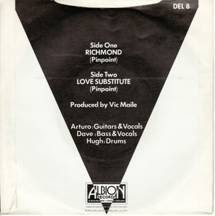 They did release a further two singles (of which I have) and an album, which I don't (and I would be interested in hearing if anyone out there has it).


Ripped from glorious scratched vinyl
Posted by Punkzer0 at 11:09

Great upload again mate. Esso's real name is Pete Haynes not Arthuro. Arthuro (Bassick) was the original Lurkers Bassist who later came back to the band and took over lead vocals (he still is today) So Esso and Arthuro are 2 different people. Both have recently brought out a book on the Lurkers too.

A couple of years ago I saw the 999 here in Stockholm. In the band was a former Lurkers, does anyone know who?
Robert - Stockholm

Yes it was also Arthuro. He plays bass in 999 too

Hey longy you are right, and I should also know as I used to hang around with the Lurkers (one of the Kingston Lurker Liggers. So don't know what I was thinking, thanks for the correction.

Hey, what do you use to transfer vinyl to CD/MP3? I mean, I suppose it depends on what kind of player you have, but I was just curious what you do and what you use.

I'm hoping to find out how to transfer from my turntable, but it's pretty ancient. It still plays fine, but I just don't know what to do with the old output jacks. I've got one little gem that I haven't seen anywhere else yet: the one single done by Magic Michael with the Machine Gun Etiquette-era line-up of The Damned. When I figure it out, I'll post it on my blog: http://clearwaterahead.blogspot.com

Hi Claudius, nice blog, I took a stroll over today, some excellent postings.

I started by buying a Denon CD recorder for my stack system, which was pretty cool, but one major problem is it burnt straight to disc, so if you made a mistake, or a record jumped, you had to keep doing it again 9used up a lot of discs). Also tracks were difficult to name, so most ended up as just track 1, 2,3 etc. which was time consuming.
I then went out and bought the Ion USB turntable and just hooked it straight to the PC (it's not the greatest turntable, but it works), I also have the Ion USB cassette deck so now everythings hooked up. Then I just use Audacity. All of the components are under £100 so well worth the investment (in my opinion)

There is another pinpoint record, 12" vinyl with a standout tune called "Third State" on it.

Hi tony, yes they had a 12" which was free with their album, both of which I am still looking for. Do you have it?