The Nosebleeds - Ain't Been To No Music School 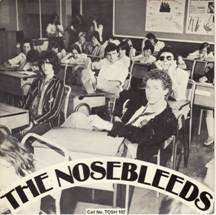 The Nosebleeds first and last single.

Starts with a nice piece of classical music and then straight into some classic punk.

Although the Nosebleeds never really made it, this did sell a respectable 10,000+ copies. The a-side "Ain't been to no music school" is good and the b-side "Fascist Pigs" is average. But I'll leave it to you to decide.

One story I always liked about the Nosebleeds was when they played the Roxy and decided to play two song repeatedly instead of their whole set. This not surprisingly got the crowd going, and as punk was in those days, it perversely ended up with them being invited to more and more gigs. 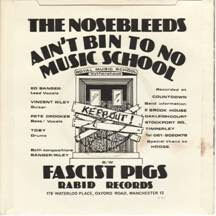 A little etching trivia on this vinyl, although I don't know what they're supposed to mean. Side a has "Sinus Trouble" and side b has "Boddingtons" and "Mr Foe". Who knows?

2 average tracks, but no mention at all of Morrissey being the lead singer? great blog gary, keep posting m8.

Hi brassneck your right, but Morrissey did not join until the second incarnation and didn't feature on "Ain't been to no music school". Still a good bit of info that most probably should have been included.

Hi anon, I got the boddies (even though I'm from the South), I'va had a few pints myself.

It was the other etchings that I couldn't understand