Brian James - Ain't That A Shame 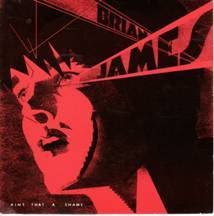 Brian James was formerly in the Damned and Tanz der Youth. He only released one single as Brian James and here it is.

I always liked this single especially "Ain't that a Shame" and "I can Make You Cry" even though it was never really rated on its release. He went on to produce an album as well which you can find at here at Rollmops blog.

For those of you who are interested, Stewart Copeland also played drums on this single.

Bit more etching trivia on the a-side: "A James Shame" 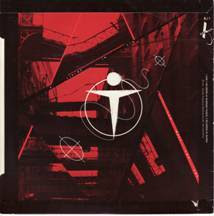 He also relesed this:
"The Brian James Gang"

Hi Robert, thanks for the extra info. I will try and get hold of the Brian James Gang.

Nice blog as well, I will add you to my list.

I have "The Brian James Gang" Selftitled Album...If you need it.

Hi Mug, thanks for your comments, much appreciated,

Thank you, thank you, THANK YOU for posting the link to this song!!! I had the IRS Greatest Hits 2 & 3 cassette and absolutely LOVED this song (not to mention I had the hots for Brian in the Lords of the New Church). I had his newer self-titled LP which he did a remake of the song, but I always preferred the original. I couldn't find it anywhere; I took to scouting used cassette stores to see if I could find it, no such luck. Thank you again!!!

Hi Robbie, thanks for the comment. Have you checked out the Tanz Der Youth stuff as well?

hi Erme thanks for the comment. This is a very underrated song. Glad you enjoyed. It's worth checking the album out as well with a completely different version.

He always recorded another solo single called "Why why why" with "Where did I find a girl like you" as the b side, again Stewart Copeland on drums - illegall records - early 80's

He always recorded another solo single called "Why why why" with "Where did I find a girl like you" as the b side, again Stewart Copeland on drums - illegall records - early 80's

Hi Jon thanks for the comment, never heard that one, do you have a copy?

Yes I do have a copy on 7" Single but don't have anyway of converting it to a mp3. I will be happy to send you a picture of the sleeve if are interested? By the way - great site brings back a lot of memories! Jon C

Hi Jon, thanks for the compliment, much appreciated. Shame it would have been good to hear it. I'll have to keep an eye out for it now. Always interested to see the cover, then I know what I'm looking for.

"Living in sin" is absolutely great. Hadn't heard it in 28 years or but, ahem, borrowed the riff for one my own bands, ;P

Hi tony, I think most of Brian James stuff is underrated and also a shame that so few people were aware of his works post the Damned.

Thanks for that Jon