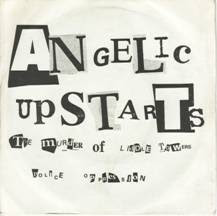 The debut single from 'Angelic Upstarts' was the second of two protest songs about the unjust murder of 'Liddle Towers' (I posted the Dave Goodman sister protest song earlier). It was at first self released with only 500 copies, and was then picked up by 'Small Wonder Records"

This is a great song, it starts quiet and builds up and you can hear the anger from 'Mensi' as he screams out:

The b-side 'Police Oppression' is also good, but its the a-side for me, that still gets me singing 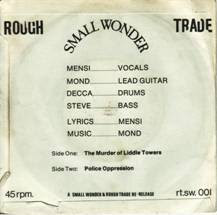 Even though I did buy most of the 'Upstarts' singles, this is the only one that I keep playing. even though some of the others are not bad, I never get around to playing them.
If you like this, then go and buy this album, it's a good collection of their best songs: