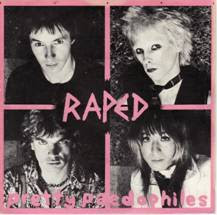 Well I mentioned in the "Carpettes" posting, that punk bands tried to shock or be funny and "Raped" did everything they could to shock. The name of the band, the name of the ep (pretty sick), some of the lyrics. Even the etching "messy sounds 4 u".

And shock they did, the press ranted over it, and it was banned in all standard stores, which they even had printed on the back cover "not available in W.H. SMITH, BOOTS or WOOLIES".

Shame really because the tracks are all very good, and I still play them today. They had one other controversial single (http://www.punk77.co.uk/groups/raped2.htm) as "Raped" and then changed th 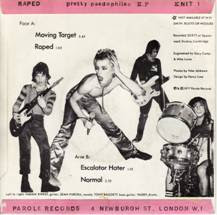 eir name to Cuddly Toys and became much more mainstream (trex/bowie style), in my opinion, worth a look as well.

A little trivia as well. For many of you vinyl collectors you will be familiar with the tiny etchings on some records, one of the most common is "a porky prime cut" on this one it has a "a normal porky prime cut" a slight play on their track on this ep.

So ripped from glorious scratched vinyl, download in inferior mp3:


If you like this, then go and buy their CD all of these tracks and more are on it:

"normal you're not normal, normal's so informal"

Because I've had that in my head for years but I can't remember where it came from.

Hi Essai, yes it does, why don't you try it?