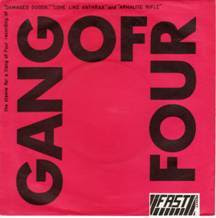 Although early (1978) this was never seen as Punk, and is now classed as post punk. I personally couldn't care less as all three tracks are top notch. released on the FAST label as a double a side (on one side it says "Side 1" on the other side it says "Side 1 as well").

I posted this as only two of the three tracks appeared anywhere other than this single. "Armalite rifle" for some reason was left of the album, even though it is brilliant. So here's all three for you.

There is an amusing little note 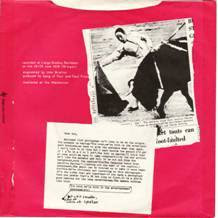 on the back cover, about what should be on the front cover, I have included a high resolution scan in the download so you can read it.

A bit more etching trivia, I think this is another take on the classic "Porky Prime Cut" this one has "A Spikey Spectacular"


If you do like then definitely go and buy their brilliant debut album:

Hey I also have this EP that I bought when it was out, a few years ago ;-)

I never stopped loving it. It is Gang Of Four at its best at my thought. Great post!

Hey geranium, thanks for you comment, and nice blog, if anyone read this go and check out some of his (are you a him?) postings,

Hey, this is Dave Allen from Gang of Four, I just came across your site and I like what I see. I've posted new Gang of Four recordings (demos) on my blog -
http://www.pampelmoose.com

Hi Nowt special, thats exactly what I felt when I read it.