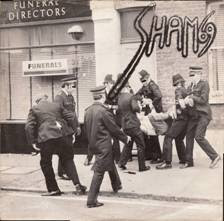 I know many people have debated whether Sham 69 were Punk or Oi, but I can tell you in the beginning they were punk. Listen to these tracks and you will hear for yourself. The fact that an eventual mass skinhead following allowed them to be rebranded to Oi, and their later material could nearly be classed as pop (some of the cheesy songs like “Hurry up Harry”). It was too dangerous to go and see Sham 69 once the skinheads took over, I remember going to see them in Kingston after about 6 songs in, we had to run for our lives (about 30 chasing 2 – not to good odds in my books)


Their first single was a 12” released on Step Forward. For me this was another punk classic, and personally I couldn’t care 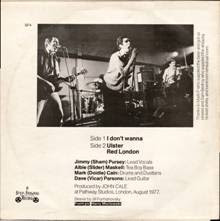 how they were classified. I Don't Wanne is 1.40 long and still makes me wanna jump around and protest about working, etc. Red London is a mighty 1.50 long, this is the average one for me, and then the excellent Ulster. The cover is incorrect as side 1 is "I Don't Wanna" and "Red London" and "Ulster" is on the b-side.

If anyone has time and knows how to, they can go and up date Wikipedia as they do not show the original Sham line-up with Albie Maskell on Bass (see back cover).

So ripped from glorious scratched vinyl:


If you like this then go and buy there excellent first album. I wouldn’t bother with any of the others, although if you do want to get a few more of their singles then the singles collection isn’t bad, although you will have to put up with a few a of their very commercial hits:

Great upload my friend. Sham were and always have been a punk band. Anyone labelling them anything else (ie Oi!) is simply daft.

BTW this was also released on 7 inch (same cover) but was much harder to find. If was released on both 7 and 12 inch with a different cover a couple of years later.

One of the things I really like about these blogs is the comments you sometimes get. I though I knew a lot about punk, but I keep finding out new stuff. Thanks for this I didn't know there was a 72 version.

Thanks for this - a long time favourite, 'cos my big sister had the 7". And of course it's punk and not Oi! Oi! hadn't been thought of when this came out.

Glad to help John. Thats a rare one the 7" has your sister still got it?

Hi Chris, thanks for your comment. Theres more to come from Sham